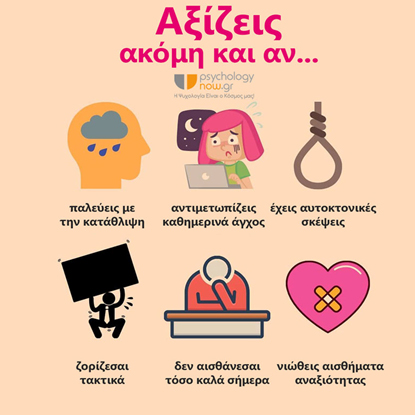 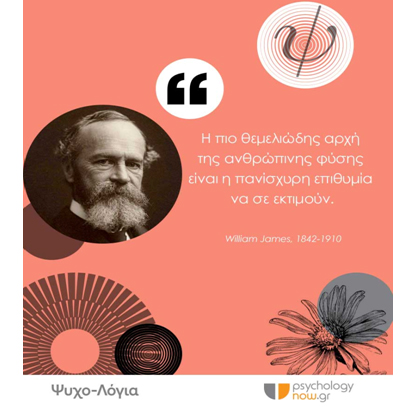 If you find yourself in such a situation, you can follow these steps:

If you decide to move elsewhere with your minor children (if any), be sure to ask before the incident is recorded in the police record book or send an out-of-court statement announcing your personal relocation and / or the children your.
If you need hospitality, you can apply for free temporary accommodation for you and your children (if you have one) at the National Center for Social Solidarity (135 Vasilissis Sofias & Sakharov, Athens - Ampelokipi, contact phone: 213-2039706), as well as at the General Gender Equality Secretariat (SOS 15900 telephone line).
Sources for forms of violence:

Papamichael, S. (2004). "The woman as a victim of domestic violence: the characteristics of perpetrator and victim and the relationship between them"
(Doctoral thesis). Panteion University of Social and Political Sciences, Athens.

Law no. 3500/2006: for the treatment of domestic violence and other provisions.
Retrieved from  https://www.lawspot.gr/nomikes-plirofories/nomothesia/nomos-3500-2006

The physical and emotional trauma of domestic violence

Dimitris Karagiannis: "We have our crap but we are not crap" One of the greatest Greek psychiatrists talks about domestic violence and the good side of a negative emotion. 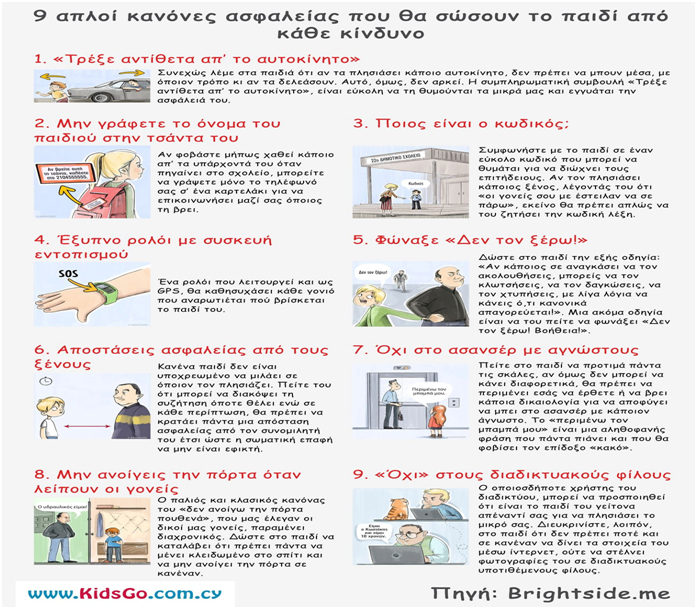 "9 simple rules that will save the child from any danger"

WHAT IS BULLYING - SCHOOL BULLYING?

Bullying or school bullying is defined as the unwanted, aggressive behavior that develops between students, the manifestation of which is intentional, unprovoked and repetitive and aims to impose, and cause physical and mental pain to the person (or persons) who suffer from it. .

In order for a behavior to be considered intimidating, that behavior must be aggressive and include:

Power imbalance: children who bully use the power they have - physical strength, popularity, etc. - to control or harm other children.
Repetition: bullying behaviors occur more than once.
Intimidation includes actions such as threatening, spreading rumors, attacking someone, either physically or verbally, and methodically isolating an individual from a group.

There are three types of bullying:

Social bullying, which refers to situations in which bullying involves the social exclusion of a child from the group, defamation or public humiliation.

Physical bullying, which refers to situations in which a child is physically harmed by other children or destroys objects that belong to him.

SIGNS THAT CAN BE CONNECTED WITH BULLYING

Source of information on bullying:

WHAT IS CYBERBULLYING - INTERNET BULLYING?

The term cyberbullying or cyberbullying refers to the type of bullying that takes place through electronic devices such as mobile phones, computers and tablets. Cyberbullying can take place through messages, applications or online on social networks, forums or games, where people can communicate, participate and share content. Cyberbullying is about sending or spreading negative, harmful or false content to someone else. It may involve the dissemination of personal or private information to another person for the purpose of humiliating or humiliating the person being exposed. However, there are cases in which the limits are exceeded and now these actions are purely delinquent and criminally infernal.

The most common places where cyberbullying takes place are:

social networks such as Facebook, Instagram, Twitter and Tik Tok
via messages through corresponding applications on mobile phones and other electronic devices
by sending instant messages to sites that support direct communication between users
via e-mail
online games and the communities that support them
BULLYING INTERNET FORMS

It is important to understand how children who are being bullied online make the process of identifying and taking action easier. Some of the most common forms of cyberbullying include:

posting comments or rumors about someone online, which are malicious, are intended to harm or humiliate that person.
the threat to hurt someone
posting an image or video that is intended to harm someone
the situation in which someone pretends to be someone else with the ultimate goal of exploiting another person or posting personal or false information about someone else.
posting malicious or abusive words, comments or content about race, religion, financial status, nationality, sexual orientation or other personal characteristics of an individual online.

Many parents want to help their children with problems related to cyberbullying, cyberbullying or digital abuse. The prospect of trying to solve an internet problem may seem daunting to parents, as keeping up with the growing list of social networks in which their children participate is proving to be a particularly difficult task. In cases where parents are not familiar with the full range of possibilities provided by the internet, as a result of which they do not fully understand their children's online activities, they are likely to end up feeling helpless and desperate. This section addresses some of the most common difficulties faced by parents in cyberbullying and digital abuse and looks forward to providing you with step-by-step instructions to ensure that you enable your child to develop a safe and healthy relationship. with the internet.

THE VIEWPOINT OF CHILDREN / TEENAGERS:

WHY ARE THE INTERNET AND SOCIAL NETWORKS SO IMPORTANT FOR TEENAGERS?

Young people use the internet for a variety of reasons. Some people use it as a means of escaping from reality - they believe that once they enter the digital world, they can be their authentic self and express themselves accordingly. Others use social media as a mask, behind which they hide their insecurities and worries. Be that as it may, they invest a lot of time and emotion in their digital profiles and that is why anything said about them on the internet can have a powerful effect - either positively or negatively.

It is important to ensure that your child knows that you will be there for them, especially when they are experiencing such problems. If a child or teen thinks their parents will not understand what they are going through or if they think their parents may restrict their internet access or delete their social media accounts, they are unlikely to come to you when face problems or concerns of this nature. Without the help and support they need, they risk being isolated and hiding what is happening to them - which can lead to other symptoms such as depression, anxiety, social isolation and poor school performance. Problems of this kind affect virtually every aspect of a child's life.

DEVELOP A DIGITAL RELATIONSHIP TOGETHER

Try to maintain a good communication relationship with your child in general. This will give you the opportunity to see the digital world through your child's eyes while at the same time laying the groundwork for your child to feel comfortable coming to you when they need help and support. Adopt the .open door¨ approach, encouraging your child to talk openly to you about issues that concern them, without criticizing them. Even if it is something that you can not solve yourself, you can certainly support, advise and assist your child, finding the most appropriate solution to the issue that concerns him. 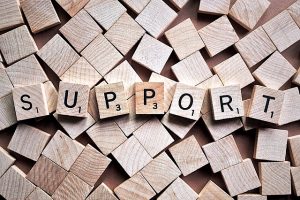 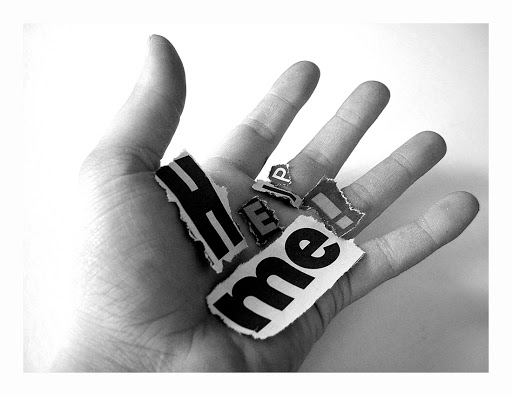 MENTAL HEALTH AND THE PANDEMIC

Following the above link you will find a useful guide with tips for parents in the midst of the pandemic, in English, but also translated into Greek and other languages.

⦿ Legislation Regarding The Organization

Fill in your email